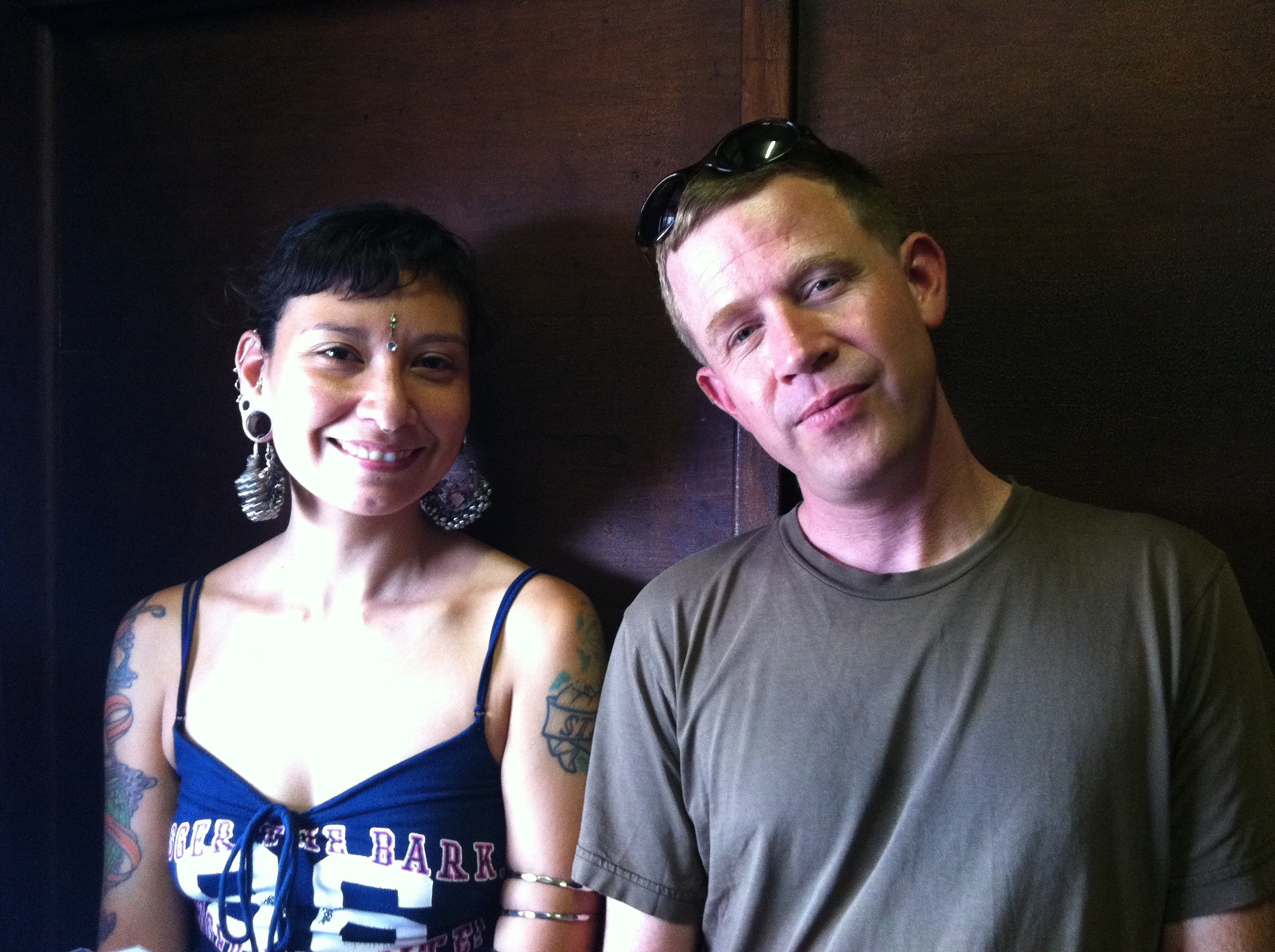 Rain Dance!!!! On Wednesday August 17, minicine?, will conjure rain clouds, with a live performance by Sound::Medicine::Research plus, David Dove & ms. Yet… To make sure this works,,, this is an outdoor show in our space with no roof…

Special Guests, David Dove (trombone, amped & with effects, sub-woofer)) & Ms. Yet (bellydance, movement) from Houston, will join us as part of their 2011 Southern Tour… In a nutshell, it’s another H-Town mashup that can’t be pigeonholed into a pre-existing sub-genre of “experimental” music (or bellydance, for that matter). Brooding sub-bass trombone loops and screwed-down trombone doom-blues texturize the air molecules. Bellydance (“Muscle Dance”) is abstracted to an essential medium of form, line, musicality, and “muscle-ality”. Extended from a practice of drawing, it embodies improvisational, corporeal ‘drawing’ in space.

Should we actually conjure rain::: show will conclude in 846 Texas Avenue… Show is FREE… (and No Alcohol)!! 8PM…

Trombonist, improviser, composer, and educator David Dove grew up learning his horn in the public school band program, while at the same time playing electric-bass in punk rock groups. Before he was out of high school, he began a period exploring (formally and informally) a range of musical styles (including classical, jazz, experimental and 6 years in the band Sprawl). In the early 1990’s, he became dedicated to free improvisation, gigging and experimenting with a small group of like-minded Houston musicians (including New Zealander Paul Winstanley and the then-trio Charalambides). A degree of isolation, an eclectic musical background, and a commitment to creativity eventually led him to conceive of a new approach for music education based on creativity, diversity, and improvisation. In 1997, Dove started working at MECA, an inner-city arts community center, where he began to develop this approach. In 2000, Pauline Oliveros (an important mentor) invited him to start a branch of The Deep Listening Institute (DLI) to further his education goals and bring contemporary musicians to Houston. In 2006, DLI Houston became Nameless Sound, an independent, Houston-based non-profit organization. Nameless Sound reaches over 1500 young people every year through creative music workshops in public schools, community centers, homeless shelters, and refugee communities. Dove has given performances and workshops all over the US and some internationally (Mexico, Canada, Scotland, Vietnam, Germany). He has collaborated with many of his favorite local/national/international artists (some well known, some less known)*. In 2003, the critics of the Houston Press named Dove “Best Jazz Artist”. In 2004, he received an artist fellowship from The Cultural Arts Council of Houston and Harris County. In 2011, he and Nameless Sound were presented with The Houston Press’ “Mastermind Award”.

Y. E. Torres (ms. YET) is a contemporary bellydancer and a multidisciplinary visual/performing artist. She acts as a visual artist, dancer, model, costume designer, photographer and curator, in a wide range of collaborative projects. Working alongside musicians, filmmakers and photographers, she focuses on collaborations of seemingly disparate artforms into single events. As a visual artist, she creates mixed media drawings and paintings inspired by music, exploitation art/entertainment, physical anomalies, curiosities, painful challenges of human conflict and the deviant, sensual nature of human emotion. As a contemporary bellydancer, her performances range from folkloric, modern bellydance fusion and an investigation of improvising movement to sound. In combination, Torres uses the practices of drawing, costumes design, installation and movement to create environments and luscious insular landscapes, where her body plays the role of dancer and canvas. Torres began her study of Oriental Dance at the age of 17 while attending Houston’s High School for the Performing and Visual Arts as a visual artist. After receiving a BFA in Drawing & Painting and a BFA in Fashion Design from the University of North Texas, Torres immediately returned to her dance and performance study. She is a Yoga instructor (200 RTY), Bellydance/Fusion instructor, Level One Certified by the Suhaila School of Bellydance and has traveled throughout the United States to train with Jill Parker, Suhaila Salimpour, Rachel Brice and a cast of present day masters of the bellydance and tribal fusion forms. Torres has exhibited her visual art at museums and galleries throughout the US and Europe. For the past several years, Torres has been (as a movement artist/dancer) an active member of the improvised music scene. As a an improviser, Torres has collaborated with many musicians, including: Tatsuya Nakatani, Sandy Ewen, Tom Carter, Sabir Mateen, Donald Miller, Rob Cambre, Konk Pack, Damon Smith, and David Dove.