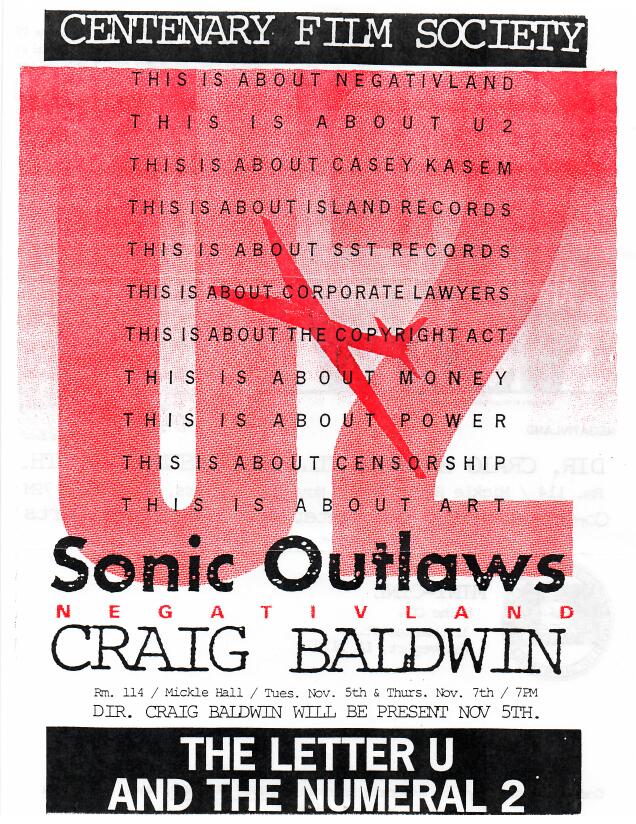 Craig Baldwin, outlaw filmmaker (Tribulation 99, SFIFF 1992), has founded the perfect material on which to wield his mighty editing knife and vast found-footage collection.  Sonic Outlaws begins as a freewheeling portrait of Oakland-based noise band Negativland, which was sued by Island Records for releasing an album which, Island claimed, infringed on the rights of one of their artists, the superstar band U2.  It's a great story, richly ironic, outrageous and hilarious.  But that's only the beginning.  Baldwin's documentary then rockets through the whole world of copyright infringement, "fair use," and sound and image sampling--from its roots in the Dada and Cubist movements to Andy Warhol soup cans, from Silly Putty to satellite downlinks, from billboard "improvement" to do-it-yourself Barbie surgery--laying out the foundation of a new 'electronic folk culture."  And, this is no public TV-style documentary--far from it--because the whole film is processed through Baldwin's own brilliantly collaged media barrage: monster movie, TV evangelists, Pixelvision, Daffy Duck, "jackalope" postcards and Casey Kasem cursing like a truck driver are but a few of his weapons.  It is truly an astonishing and exhilarating film, both deeply thought-provoking and laugh-out-loud funny.  -Tod Booth