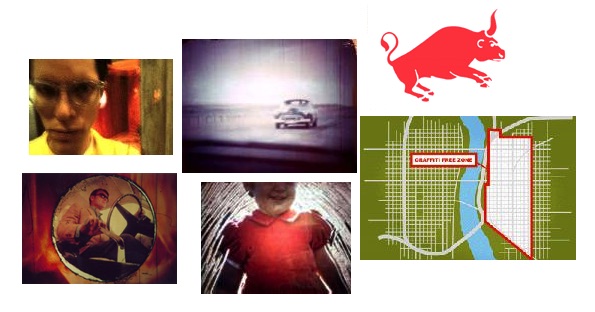 MATT MCCORMICK and JOHNNE ESCHLEMAN of Portland’s Peripheral Produce pack up the van and hit the road to show movies and see some sights. Matt combines found films with original sounds and images to fashion abstract and witty observations of contemporary culture. Johnne (aka The Distance Formula and/or The Traveling Cinema) deconstructs thrift store home movies one frame at a time and rebuilds them into moody time-based performed installations. Both will be collaborating on new, site-specific pieces that will be unique to each screening event.

MATT MCCORMICK is a 29-year-old filmmaker who uses original and found footage to create short, poignant collages. His experimental documentary “The Subconscious Art of Graffiti Removal” is a keen observation of how the process of destroying one art unwittingly creates another, and was an official selection of the 2002 Sundance Film Festival. “The Vyrotonin Decision” is a found footage disaster spoof that was awarded the “Best Experimental Film” at both the New York and Chicago Underground Film Festivals. Other films of Matt’s which have been receiving attention include “Sincerely Joe P Bear”, a sad love-letter from a heartbroken Polar bear, which screened at the Rotterdam International Film Festival. His brand new abstract short “Going to the Ocean” just premiered at the New York Film Festival in October 2001.

JOHNNE ESCHLEMAN is a mobile experiment in spontaneous cinema. Johnne projects hand-made films while performing a live soundtrack, creating an ever-changing and intimate viewing experience. He recently toured the US with his performance-installation piece, “The Traveling Cinema”. He has presented his work at the Museum of Contemporary Art, Chicago; PS 1, New York; the Portland Institute of Contemporary Art; and many other venues around the country. Eschleman’s “The Read Letters” is a movie in which two 16mm projectors roll simultaneously, projecting side-by-side images of bleached found footage and text which has been hand scratched directly into each frame. Johnne accompanies the film with a live soundtrack using electronic keyboards and a xylophone.

Supported in part by a grant from the Louisiana Division of the Arts and the Shreveport Regional Arts Council.