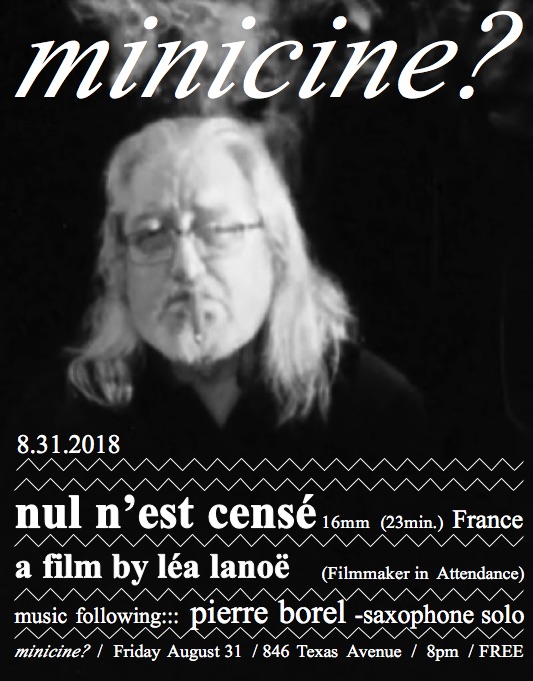 Friday, August 31st, minicine? hosts Léa Lanoë to screen "nul n'est censé". At 23min. this short film is a portrait of a retired judge. "Different images from him are buil(t) and shattered, in shards : a proud judge, a cynical judge, a disenchanted judge that (reveal) several faces of justice, desacralizing it." The screening will be followed with a saxophone solo by Pierre Borel. Both Léa and Pierre presented at minicine? in 2015 as part of veRmulsCHt/Berlin. Vegan hors d'oeuvres by GoGreenly.

About The Film::: "The film features a retired judge that spend his life staging others and himself, between court rituals and crime-scene reconstructions in which he plays the criminals. The world of the judge is over, and he is swinging between keeping his illusions or loosing it. The parable "Before the law" from Kafka comes undermine his system, and he is playing the game. Different images from him are build and shattered, in shards : a proud judge, a cynical judge, a disenchanted judge that are showing several faces of justice, desacralizing it. The 16 mm film fragments, isolates, desynchronizes and shakes the narration up. How to represent memories, in a brain in action."