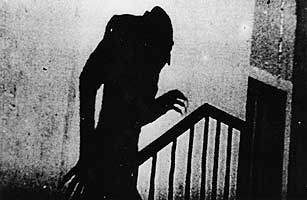 “Nosferatu, like The Cabinet Of Dr. Caligari and Metropolis, descended from the same artistic wave of German cinema in the 1920’s, is the definition itself of artistic film, where painting, architecture, literature, psychology, and politics meet in a work that gratifies both the eyes and the spirit. Thus the film develops over several dimensions, from its artistic claim of Romantic-Expressionism, the advent of Nazism, to homosexuality, desire, globalization, and a reflection on cinema itself. Murnau draws from a history that links Vampires to unexplained deaths. The term, Nosferatu, is of modern origin and derives from the Slavic “nosufur-atu” which is a derivation of the Greek “nosophoros” or “plague carrier.” The understanding that rat-borne illnesses were the cause of many plagues dominated scientific thinking in recent centuries. While in earlier times many unexplained deaths fueled a developing culture of Vampirism and the concept of the “un-dead” in Europe. While drawing on popular Vampire lore Murnau and Albin Grau also relied heavily and without permission on Stoker’s novel. They apparently had no intention of paying any royalties for their use of the novel as the basis for their screenplay. They attempted to disguise the characters by changing their names and geographical setting. The film premiered in 1922 but eventually, Florence Stoker with the aid of the British Incorporated Society of Authors succeeded in destroying the original negatives and most of the prints of Nosferatu.” Devil Music Ensemble