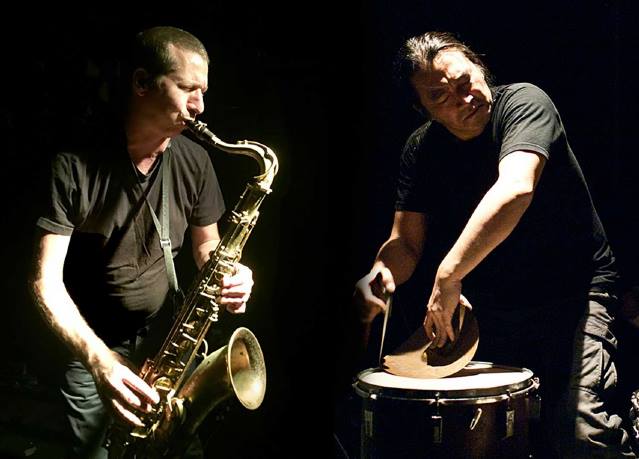 Assif Tsahar and Tatsuya Nakatani started their duo 16 years ago getting together once a week every Sunday to play in Cooper Square, downtown Manhattan. After a year they put out their first of three CD's, “Come Sunday” which was followed through the years by “Solitude” with the audition of a string quartet, their last duo “I got it Bad” and one sound track for the Israeli film “Thailand”. Even after stopping their weekly meeting they continue their collaboration, playing and touring, their musical interactions becoming telepathic and mystical.

From the press -
“Tsahar is one of the great champion's of tonal dynamics. His esthetic is dictated by what is actually called for in discovering the way a tonal center displays not only color and openness,
but also rhythmic possibility. The way Nakatani plays through this adds not only dimension, but also depth. It's a question of language and punctuation in a sonic setting. This is an awesome dialogue that moves vanguard jazz in new and astonishing directions. “- All Music Guide – Thom Jurek

"The third release for the collaboration of Assif and Tatsuya, each one is titled after a different Ellington's composition and on this one it is "I got it bad" which gets it's invocation betweens Tatsuya's bells and Assif's deep and dark tenor. What sets the tone for a mystical journey of 20 tracks full of moods fitting of a Tarkovsky film sound track. The two match tone colors and overtones with breaths of angular intervals to create a beautifully strange soundscape.” - Squidco