Men and Animals: The Films of Jim Finn and Dean Rank 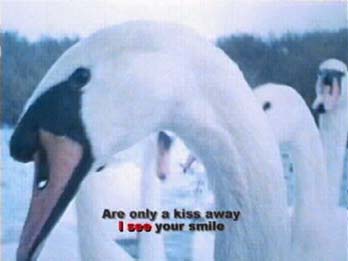 Jim Finn’s films have screened at the Rotterdam International Film Festival, New York Underground Film Festival, Impakt in the Netherlands, Museo Tamayo in Mexico City, Cinematexas in Austin and the L.A. Freewaves Festival. His film comunista! was featured on the PBS show EGG the Arts in November 2001 and el g¼ero was chosen to take part in the touring 2002 European VideoGallery. Snow and Farm, a photo from a series using miniature models and Prozac pills appeared in the January 2000 issue of Harper’s. He is currently planning a US tour of his work for the spring.

“Jim Finn now lives in Chicago making films and videos about the struggle of capitalism, communism, history and love and are sort of odd, quirky and charming.” Videoart Center Tokyo

Dean Rank studied film and video at the University of Illinois Chicago. His work has been screened at the Thaw Film Festival in Iowa City, the Aurora Picture Show in Houston, Blinding Light in Vancouver, Vox Populi in Philadelphia, and the Butcher Shop Gallery in Chicago. His last project was an experimental music video for the band Shipping News, which screened at the Wexner Center for the Arts in Columbus, Ohio. He is currently in Chicago editing his short film opus, Team.