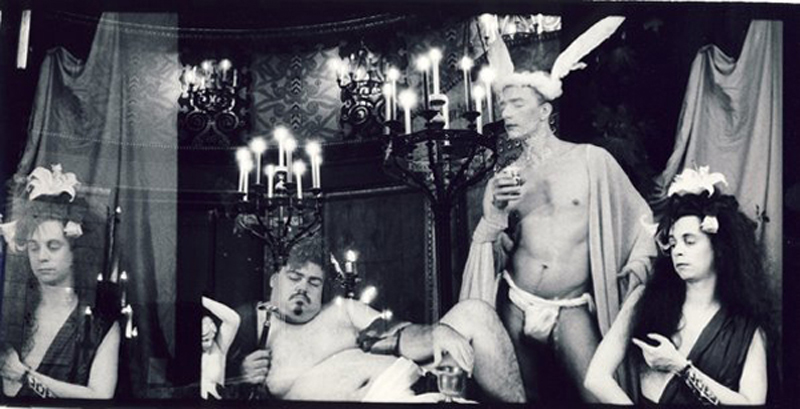 The following screening is at

WILHELM HEIN, a pioneer figure of German experimental cinema since the 1970s will be at Zeitgeist (in New Orleans) with experimental filmmaker ANNETTE FRICKfrom Berlin to screen and discuss their own work and some of the masters of European radical cinema- Otto Muehl and Kurt Kren. As a filmmaker and organizer, he, along with his former wife, Birgit Hein, has had a considerable influence in the development of the experimental film movement in Europe. Zeitgeist is only one of two venues Wilhelm Hein & Annette Frick are visiting (along with Millennium in NY) in their first visit to the U.S. in over a decade. So this is major. Attendance is mandatory!

WILHELM HEIN: YOU KILLED THE UNDERGROUNDFILM OR THE REAL MEANING OF KUNST BLEIBT.. BLEIBT.. REEL FIVE (2001-2008) 55 min. Assembled from over 10 years of footage he shot and collected, Wilhelm Heinâ€™s â€œYou killed the Undergroundfilmâ€¦Projectâ€ is a fascinating and challenging example of what it means to make politically relevant underground film in an increasingly rented world. The films title is partly taken from a text of a performance by Jack Smith at the 1974 Cologne Art Fair that Hein documented and uses here in the films prologue. On the soundtrack we hear Smith’s familiar, almost comforting, nasal drone bemoaning museums, the art market and artists whose images suck the life out of their subjects, and the thinning of art. Images of Hein next to various public sculptures and monuments in Poland, the Ukraine, and Russia accompany parts of Smith’s rant. In this sequence, as in many others (for instance, the witty nod to Andrew Warhola set in Warsaw and scored with A Night In Tunisia), Heinâ€™s unexpected combination of sound and image, of references and citations, calls to mind what might be one of the films central concerns: what can underground film tell us about the changes in Eastern Europe over the past 15 years? Heinâ€™s revue-like film demonstrates the relevance of asking the question while offering numerous ways of answering it. The film functions as a burlesque show of aesthetic strategies and possibilities, invoking either directly or indirectly a mix of Heins favourites, including Marcel Duchamp, George Grosz, Nick Zedd, Arnold Schoenberg, Derek Jarman, Kurt Kren, Jerry Tartaglia, Samuel Beckett, Pete Seeger, Jack Smith, Andy Warhol and many more. Hein never slips into a mode of irony or cynicism while poignantly and beautifully juxtaposing an earnest humanitarian Michael Jackson song with some re-edited Japanese porn. With his sexy, playful and contemplative film, Hein asks of the underground what Jack Smith asked of Maria Montez: give socialist answers to a rented world! This rare program of Wilhelm Heinâ€™s experimental films also include JEN SEIT a moving postcard to the late Jack Smith which he shot in KÃ¶ln, Germany in 1993 and stars Zeitgeist founder Rene Broussard as Bacchus.

KURT KREN (1929-1998) was one of the great masters of personal cinema in Europe. His singular films were often very short and meticulously constructed. In the mid-1960s he filmed some of the performances of the Direct Art movement in conjunction with Otto Muehl and Gunter Brus. Zeitgeist hosted Kurt Kren in 1994.