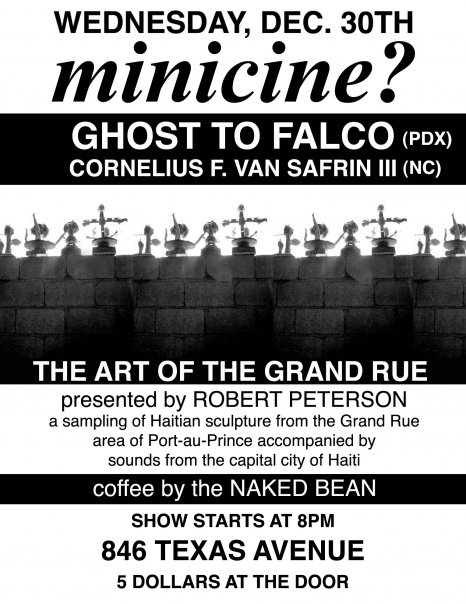 minicine? welcomes back to Shreveport, Ghost to Falco, and his touring cohort, the honorable, Cornelius F. Van Stafrin III… Kaleidoscope’s aside, this will be absolute ear pleasure!!! On tour and returning home to Los Angeles after an extended sojourn in North Carolina, Cornelius will be starting off with some super awesome noisy soundtrack type stuff with reel to reel tape machines and Tibetan singing bowls, amongst an array of other sound experiments… Ghost to Falco, homebased out of Portland, OR, and formerly a guitarist with Alarmist, is the signature solo project of Eric Crespo. As described in his press release, “ranging from psychedelic minimalism to complex looping arrangements”… “makes for an eerily beautiful and unsettlingly hypnotizing listening experience”…. minicine? has been addicted to his music since first hearing it in the Zebra Room in 2004… Read more press!!!!

Also, also, a late addition to this event, minicine? is proud to host Shreveport native, Rob Peterson (in town for the holiday), to share art and sounds from Haiti. Rob has just returned from a three week residency at the Haiti Ghetto Biennale. On exhibit will be sculpture and wall hangings collected from artists of the Grand Rue of Port-au-Prince, including works by Claude Sentilus, Jean Herard Celeur, Guerly, Mario Guyodo, Louco and Andre Eugene. A sound environment will be induced from collected field recordings from the City of Port-au-Prince, Haiti.