Faust: A Film by Jan Svankmajer 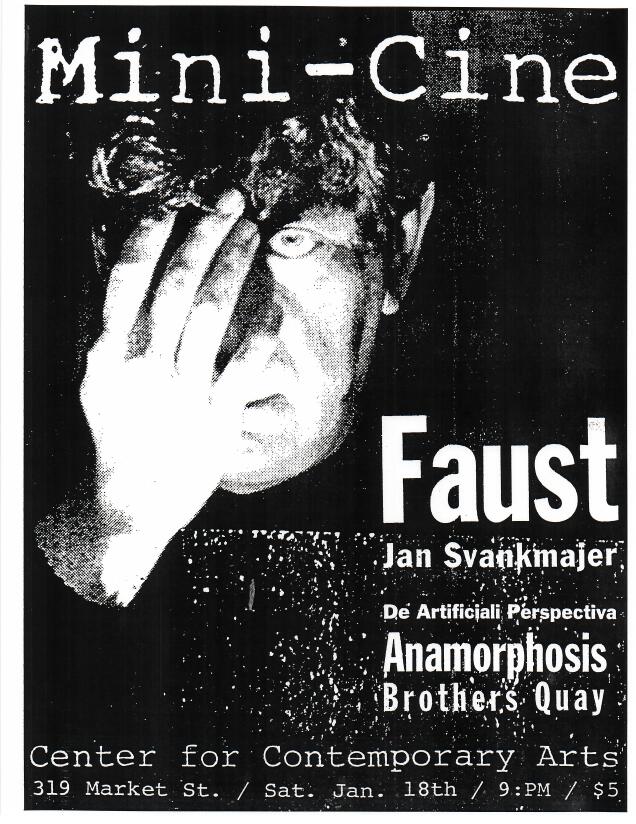 Jan Svankmajer's long-awaited follow-up to his acclaimed Alice is an equally astounding version of the myth of Dr. Faustus.  Merging live action with stop-motion and claymation animation, Svankmajer has created an unsettling universe presided over by diabolic life-size marionettes and haunted by skulking human messengers from hell.  Svankmajer Faust (movingly incarnated by one of the Czech Republic's finest actors, Petr Cepek) is an ordinary, inquisitive Everyman who, upon exiting a Prague subway station, is handed a map that draws him to his doom.  Led to an abandoned theater he finds a copy of Goethe's Faust, begins to read aloud, and unwittingly summons up a Devil who offers him everything his heart desires in return for his soul.  With breathtaking rapidity Faust's journey takes him to the tops of mountains, drops him in the middle of lakes and sends him out onto the unsuspecting streets of Prague.  People with shape-changing demons and puppet-versions of Goeth's characters, Svankmajer's tour-de-force is alternately hilarious and shocking, always unique, and ultimately unforgettable.