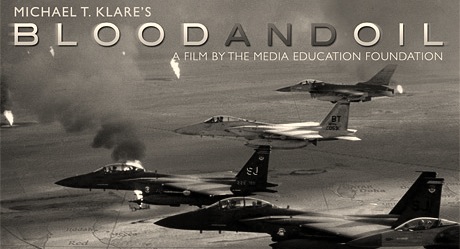 “The first step is admitting we have a problem…” minicine? host Blood & Oil, a new film from the Media Education Foundation, featuring Michael T. Klare, one of the world’s leading experts on energy and security issues, and author of such titles as Rising Powers, Shrinking Planet, Blood and Oil and Resource Wars…

The notion that oil motivates America’s military engagements in the Middle East is often disregarded as nonsense or mere conspiracy theory. Blood and Oil, a new documentary based on the critically-acclaimed work of Nation magazine defense correspondent Michael T. Klare, challenges this conventional wisdom to correct the historical record. The film unearths declassified documents and highlights forgotten passages in prominent presidential doctrines to show how concerns about oil have been at the core of American foreign policy for more than 60 years, rendering our contemporary energy and military policies virtually indistinguishable. In the end, Blood and Oil calls for a radical re-thinking of US energy policy, warning that unless we change direction, we stand to be drawn into one oil war after another as the global hunt for diminishing world petroleum supplies accelerates.