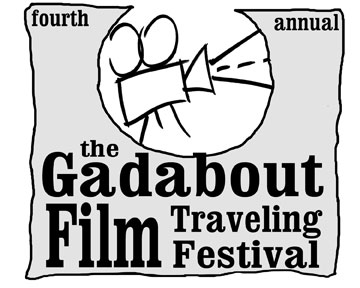 The Gadabout is a nationally touring film festival that screens a program of 15+ international short films. Independent in every sense, these films share the same willingness to challenge the conventions set for filmmaking. The Gadabout is a distribution avenue for truly indie filmmakers that distrust Hollywood and the commercial film festival circuit. They are NOT a competition, but rather a celebration of what is possible in independent film and video.

This is filmmaking as art, entertainment, and fun.

Growing and changing every year, the tour will feature live acoustic music by NY based Halo Fauna (www.halofauna.com), along with a zine and book distro, an art show, a craft sale, and the opportunity for a D.I.Y. (Do It Yourself) crash filmmaking course and discussion. They not only want to show great films, but how to make them. The Gadabout also grows more environmentally friendly with their new diesel ambulance that runs on Vegetable Oil! (www.fossilfreefuel.com) They can’t wait to show you how it works.